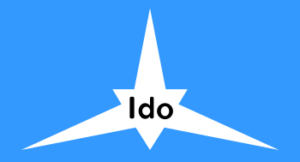 Ido is a constructed language, derived from Reformed Esperanto, created to be a universal second language for speakers of diverse backgrounds. Ido was specifically designed to be grammatically, orthographically, and lexicographically regular, and above all easy to learn and use. In this sense, Ido is classified as a constructed international auxiliary language. It is the most successful of many Esperanto derivatives.

Ido was created in 1907 out of a desire to reform perceived flaws in Esperanto, a language that had been created 20 years earlier to facilitate international communication. The name of the language traces its origin to the Esperanto word ido, meaning “offspring”, since the language is a “descendant” of Esperanto. After its inception, Ido gained support from some in the Esperanto community, but following the sudden death in 1914 of one of its most influential proponents, Louis Couturat, it declined in popularity. There were two reasons for this: first, the emergence of further schisms arising from competing reform projects; and second, a general lack of awareness of Ido as a candidate for an international language. These obstacles weakened the movement and it was not until the rise of the Internet that it began to regain momentum.

Ido uses the same 26 letters as the English (Latin) alphabet, with no diacritics. It draws its vocabulary from English, French, German, Italian, Latin, Russian, Spanish and Portuguese, and is largely intelligible to those who have studied Esperanto.

Several works of literature have been translated into Ido, including The Little Prince, the Book of Psalms, and the Gospel of Luke. As of the year 2000, there were approximately 100–200 Ido speakers in the world, though more new estimates place the number of speakers closer to 1,000-5,000.